– SET closed at 1,604.03 points, declined 15.42 points or 0.95% with a trading value of THB 100.94 billion. Today the SET Index continued to close lower by 15.42 points. All major stock markets in the region were down in the morning session after fear struck investors over recession after treasury inversion. SSEC and HSI were able to recover from a huge loss in the morning session while Nikkei and ASX 200 remained in negative territory.
The plummet of SET Index was also due to the selling from Block Trade, a selloff from the petro sector and a high selling volume from INTUCH after Temasek was reportedly selling the stake. The U.S. Treasury yields are what investors will keep an eye for tomorrow. The analyst has set a support level at 1,580 points and a resistance level at 1,620 points.

– Stocks in Focus on 15 August 2019: BCPG and Food and Beverage Sector
– BCPG: The analyst recommended “BUY” BCPG share with the consensus target price of ฿19.9/share. The analyst estimated that BCPG’s share price will slightly decrease from speculation after a second-quarter financial statement had been announced while the fundamental of BCPG has not changed in which Bloomberg consensus has estimated next year profit to grow 17.6% YoY. The low-interest-rate could cause a stock with bond-like cash flow to outperform the market. The valuation is not expensive when compared to the other stocks in the sector. PE in 2019-2020 equals to 18.5x and 16.0x, respectively, along with a 3.6% dividend yield per year.
–  Food and Beverage sector: Finansia Syrus Securities stated that Food and Beverage sector had made an excellent profit in the second quarter of 2019. A normal profit of every company in Food and Beverage sector has increased 7% QoQ, 63% YoY. Every stock in the sector sees a growth except OSP that decreased 10% QoQ. OSP’s share price has decreased, making a wider upside. The analyst recommended “BUY” with the target price of ฿37.00/share. The profit of CBG and ICHI was outstanding, increased by 20% and 11%, respectively. The analyst revised the target price of CBG to ฿75.00/share and ICHI to ฿8.30/share but the analyst did not recommend to buy CBG share due to the small upside while stated that ICHI’s profit had already passed the highest point in 2Q2019. In addition, the analyst recommended “BUY” TACC and SAPPE with the target price of ฿6.00/share and ฿25.00/share, respectively.

– ORI up 3.38% to ฿7.65/share as financial report shows high recognition from real estate.

– FPT’s 3Q profit increased 332% to ฿274 million after booking ฿948 million from the disposition of assets.

– COM7 reported a rose 36% in 2Q profit from an increase in sales and services revenue.

– PACE reported a 2Q19 net loss of ฿726 million due to revenue losses and rise in expenses.

– TKN’s 2Q profit fell 36% due to a decrease of sales revenue in China and high costs.

– STARK reported a net loss of ฿75.24 million due to low revenue and tax increases. 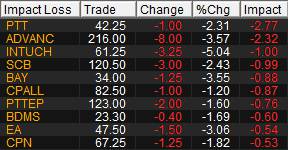