– SET closed at 1,565.45 points, decreased 2.18 points or 0.14% with a trading value of 45 billion baht. The analyst stated the Thai stock market and regional markets were still tormented by U.S. President Donald Trump at NATO summit which said that the trade deal might be delayed until the U.S. election in November next year.

However, Bloomberg had made a report later in the day saying that the deal was closer as well as the tariffs rollback.

The Thai market would have a holiday tomorrow which could give the market a breather after a long plummet. The Super Saving Funds (SSF), which would replace LTF, could be the factor to boost the market as well as the fund flow.

– Foreign Investors had yet to stop the selloff, plunged SET further with a 1,248 net sell.

– GLOBAL affirmed no structural damages to the warehouse after the fire incident.

– SET reports a lower selloff from foreign investors in Nov. due to the inclusion of MSCI.

– FORTH acquired a ฿1.15bn project from MEA to construct a smart metro grid system.

– GPSC signaled for a new high in 2020 after fully-recognized revenue from GLOW. 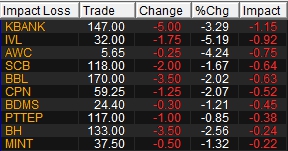