The Erawan Group Public Company Limited (ERW) has reported its 3Q20 consolidated financial statement through the Stock Exchange of Thailand as follows; 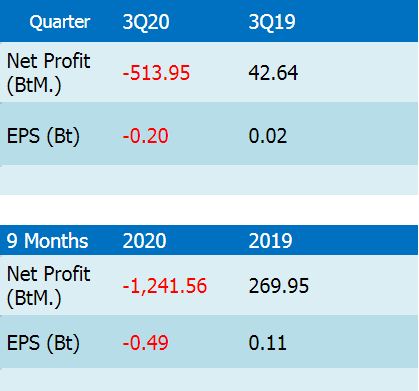 ERW generated net loss at THB 514 million which was lower compared to net loss of THB 625 million in 2Q20, but  decreased dramatically from a net profit of THB 42 million in 3Q19. Better performance QoQ was due to the gradual reopening of all hotels in both Thailand and Philippines in 3Q20.

In 3Q20, ERW recorded occupancy of total Thailand hotels at 35 percent and RevPAR dropped 78% from 3Q19, an improvement from 2Q20 which occupancy recorded at 10% and RevPAR dropped 95% from the same period last year. The recovery trend was witnessed for both HOP INN and other hotels segments.