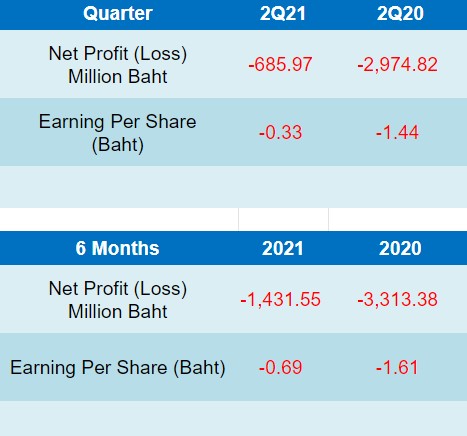 The company has been continuously challenged from the impact of COVID-19 pandemic since it has become worsening and emerged as the third wave. The government has considered imposing a lockdown policy to limit the third wave outbreak, while Thai people also postponed their travel plan during Songkran festival in April 2021. As a consequence, BA lessen flight frequency of domestic routes i.e. Bangkok to Samui, Bangkok to Chiang Mai, Bangkok to Sukhothai and Bangkok to Lampang, Bangkok to Phuket, Bangkok-Trat and Had-Yai-Phuket to match with lower travel demand and the travel restriction.

Nevertheless, compared with the second quarter of 2020, when each country had been severely forced by their own government orders, the number of flights increased by 102.4% while the number of passengers carried increased by 229.8% from the same period of last year. The overall load factor was at 57.9%.

Revenue from scheduled flights was 202.3 million baht, increased by 89.6%. The sharp growth was resulted from a resumption of domestic flight operations during the period, when the company had been severely impacted from a travel restriction due to an announcement from Civil Aviation Authority of Thailand (CAAT) regarding to COVID-19 pandemic situation in April 2020. By the second quarter of year 2021, the company resumed domestic flights with gradually increased and arranged seat capacity to match with travel demand.

Meanwhile, total expenses for the second quarter and six-month period of year 2021 were 1,936.6 million baht and 3,970.3 million baht, dropped by 47.7% and 61.4%, respectively from the same period last year. The lower amount of cost of sales and services was fuel cost that declined from lower fuel consumption and cost related to flight operation such as flight pay, aircraft maintenance, landing and parking fee, passenger services. The company reported a loss from exchange rate at 263.2 million baht.