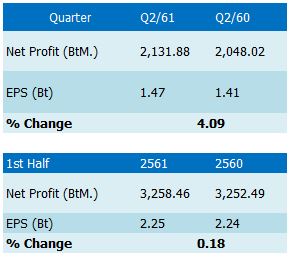 The significant reasons of this increase were the profit of Hongsa Power Company Limited (“HPC”), a joint venture, in a portion of 40 percent increased in the amount of Baht 320.61 million. While RATCH was able to render the sale and service costs by 187 million baht. The costs decreased to 1,588 million baht from 1,775 million baht in the same quarter of 2017.