– DNA announced a change in the company’s name and symbol to “More Return” or MORE.

– III invested more than ฿500 million to acquire 50% of “Around Logistics”. The deal was expected to be completed in March.

– OCEAN established two subsidiaries in Thailand and Singapore to support its business expansion.

– EA invested ฿1 billion to develop electric ferry, aimed to start its operation by the end of this year.

– Local Institutions continued its buying streak for another ฿3.7 billion, while Proprietary Trading also added another ฿770 million to their portfolio.

– SET closed at 1,655.73 points, rose 13.24 points or 0.81% with ฿45.3 billion in value. The impact from trading of major shares in the market such as PTT and AOT buoy the market greatly. Moreover, Asian markets absorbed positive sentiment from the US overnight, hoped that the trade deal between the US and China would end soon. 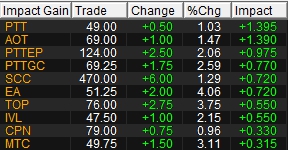