/ Kaohoon International / Trump: China “Broke the Deal!” Will This War ever End?

Following the threat of raising tariffs on $200 billion worth of Chinese goods by Friday, and only a day before the meeting with Chinese delegates in Washington, Trump made a speech during his rally, saying that China has ‘broken the deal’.

Trump said there’s “nothing wrong with taking in $100 billion a year” in tariffs on Chinese imports while asserting that the Chinese were on the losing side if they cannot find common ground in this trade deal. 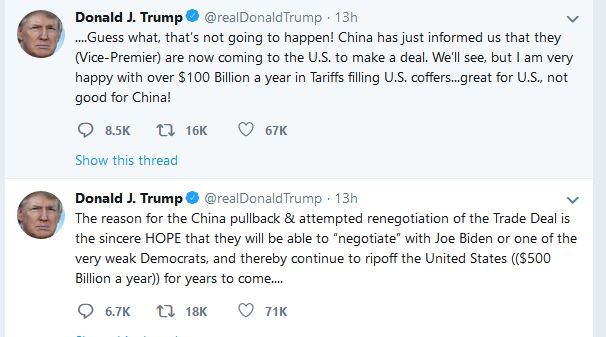 Sources familiar to the matter cited that last Friday, before the threat, the diplomatic cable from Beijing arrived in Washington with systematic edits to a nearly 150-page draft trade agreement that would blow up months of negotiations between the U.S. and China, which believed to be the reason of the angry tweet from the U.S. President.

China’s Commerce Ministry said on Wednesday that Beijing will retaliate if the U.S. did raise the tariffs. “The escalation of trade friction is not in the interests of the people of the two countries and the people of the world,” the ministry said. “The Chinese side deeply regrets that if the US tariff measures are implemented, China will have to take necessary countermeasures.”