– SET closed at 1608.11 points, decreased by 6.64 points or 0.41% with a trading value of THB 47.01 billion. Trade tension between China and U.S., after China stated was not interested in the meaningless Trade talk, impacted slightly on Asian markets. The investors are still worried to invest due to the same issue. For Thai Market, it receives the impact from the latest economic data after several government agencies lowered this year exportation and GDP forecasts. 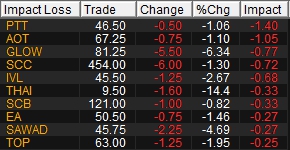