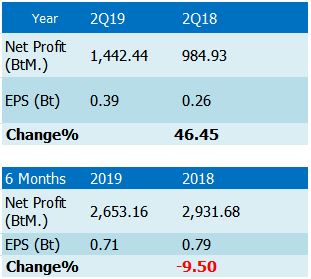 The commencement of Hanuman Project resulted in revenue recognition gradually adding up in 1st quarter for this year and fully resulting to revenue recognition in 2nd quarter. Including of revenue increased from wind power plant of subsidiary companies at Songkla and Nakorn Si-Thammarat Province total 126 MW, due to high wind speed of monsoon that normally occurs at the end of 2018 (Dec) to the beginning of this year (Jan).