– SET Index closed at 1,138.84 points, increased 0.57 points or 0.05% with a trading value of 59.7 billion baht. The analyst stated that the market was moved by the energy sector in response to the news of Saudi and Russia reaching an agreement. However, the trading during the session fluctuated after Russia denied the report.

The analyst expected a recover in the market next week from the inflow to SSF, giveing a support level at 1,133 points and a resistance level at 1,177 points.

– The U.S. President Donald Trump will hold a meeting with US oil producers today amid oil plummet.

– OPEC+ were expected to hold a meeting on Monday regarding the plummet of oil price while Saudi asked for a “fair agreement” after the U.S. President Donald Trump said he expected to see a cut of about 10-15 million barrels per day.

– SET to maintain the usual trading hour despite a curfew.

– KBANK appointed “Kobkarn” as acting chairperson after “Banthoon” resigned from the Board.

– Three stocks in PTT Group rose after a soaring oil price over the night in response to Trump’s tweet on Saudi and Russia reaching an agreement. 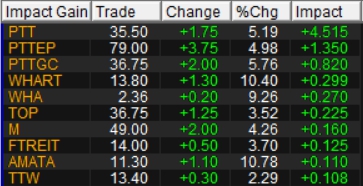