/ Kaohoon International / IRPC Bounces Back with a ฿1.5Bn Profit, Booking ฿5.1Bn of Stock Gain for the Quarter

IRPC Public Company Limited (IRPC) has reported its 3Q20 consolidated financial statement through the Stock Exchange of Thailand as follows; 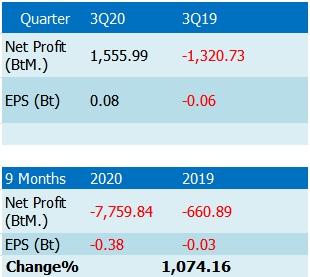 In the third quarter of 2020, IRPC’s net sales was down by Baht 16,593 million or 31%, when compared to the same period of last year, attributed to a 25% decrease in average selling price as well as a 6% decrease in sales volume.

However, the company’s net sales was Baht 37,671 million, increased 24% from the second quarter of 2020, including a 18% increase in average selling price following crude oil price and a 6% increase in sales volume. The average crude intake was 195,000 barrels per day, increased by 4%.

The company stated that in 3Q20, the average crude oil price increased from the previous quarter as a high compliance of output cut deal among OPEC and non-OPEC producers along with an increase in oil demand after the easing of restrictions during COVID-19 pandemic.

The net stock gain was up by Baht 5,103 million. This led to the higher of Accounting GIM by Baht 4,477 million or 106%, YoY. Meanwhile, the operating expenses reduced by Baht 353 million or 10% under the cost reduction measure. Therefore, the EBITDA had improved by Baht 5,105 million, YoY.