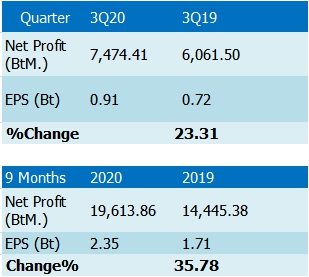 In the third quarter of 2020, the company had a net profit of 7,475 million baht, an increase of 23% compared to the same quarter last year which was mainly due to an increase in sales revenue and profit margin of oversea operation.

Revenue from sales in the third quarter of 2020 was at 157,805 million baht, an increase of 19% from the same quarter last year as a result of a 25% increase in sales from oversea operations and 7% increase in Thailand operations. The better performance was mainly due from swine business in Asia and shrimp business in Thailand.

CPF’s gross profit margin in the third quarter of 2020 was at 19%, increased from 14% in the same quarter last year, mainly due to a decline of swine population from the spreading of ASF (African Swine Fever) which has resulted in an increase in swine price in the region especially in Vietnam, Thailand, and Cambodia. Aquaculture business in Thailand has also improved due to adjustment in marketing strategy and efficiency improvement in operations. This has resulted in insignificant increase in shrimp sales in Thailand.

Prior to the announcement, the market expected CPF’s 3Q20 earnings at 6.5 billion baht.