– SET Index closed at 1,351.06 points, increased 4.59 points or 0.34% with a trading value of 78.4 billion baht. The analyst stated that the Thai stock market moved in the same direction of the regional markets as well as the Dow Jones Futures that started hiking as Joe Biden continuously gained more votes in the 2020 presidential election, while the soon-to-be the 46th president of the United States did not have plans for a nation lockdown, but instead, only in some areas or states.

However, the gain in SET Index dropped lower in the afternoon due to the selling pressure prior to the tomorrow political gatherings from the pro-democracy protesters.

The analyst advised investors to monitor the economic situation to see a potential recover after the plummet as well as Thailand’s Monetary Policy Meeting on November 18, which is expected to maintain the policy rate.

In addition, the analyst expected a sideways trend in tomorrow’s session, coupled with a slowdown due to political concerns.

– JAS recorded an increase in 3Q revenue to ฿4.8Bn as 3BB subscription expanded.

– STGT issued a ฿1.25 dividend payment and expected a listing in SGX. KGI rated STGT “outperform” with a target price of ฿125.00/share as business grew amid global pandemic.

– WICE posted an increase of 104% profit in 3Q to ฿56Mn as service income soared.

– SCN’s 3Q profit doubled in response to a recovery in gas sales and a recognition from Minbu Power Plant.

– EP posts a 15x increase in profit of ฿886Mn after disposing of four solar plants.

– BJCHI booked a backlog of ฿3.2Bn in 3Q, rising as a potential supplier for long-term projects.

– Mr. Yew Hock Koh, CEO of SISB, stated that the recovery in the company’s operation is seen in 3Q, and would continue in 4Q as the school returned to fully open and would recognize the tuition income for the new semester. 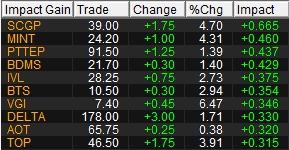