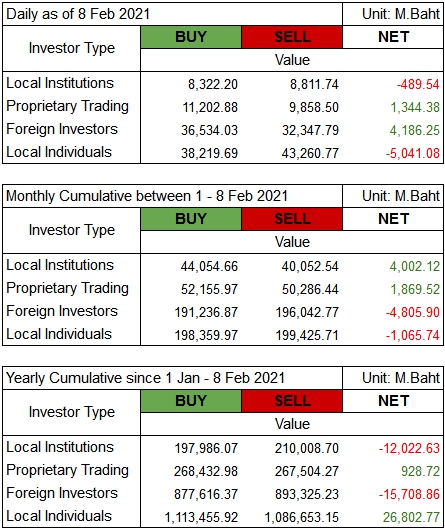 – SET Index closed at 1,516.43 points, increased 19.82 points or 1.32% with a trading value of 94.2 billion baht. The analyst stated that the Thai stock market moved in line with global stock markets in response to the upcoming U.S. stimulus package that was expected to be effective in the next 2-3 weeks.

The analyst believed the increase in the Thai stock market was due to the fund inflow, seeing in an increase in SET50 such as the banking, energy and petrochemical sectors.

The analyst advised investors to monitor the earning season and the announcement of inflation rate in the U.S., China and Germany, which could benefit the banking sector in higher policy rates if the inflation rate came out higher than expected.