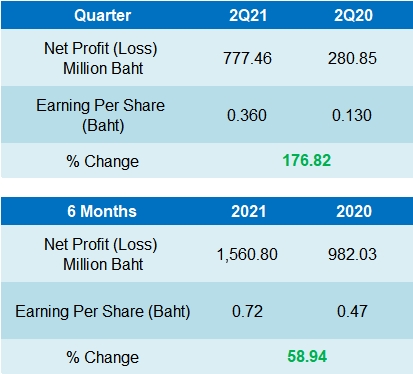 Total revenues reported at 2,918.0 million baht, increased by 35.2% from the same quarter of the previous year which was at THB 2,158.1 million. Despite COVID-19 impact, the company showed an increase in interest income on loans, mainly due to the success of “TIDLOR” card which allows customers access to cash 24 hours a day, the company continues to deliver superior services through all channels, including online, offline and mobile application services with convenience and safety amid COVID-19 outbreak.

TIDLOR stated that the company has been serving around 180,000 TIDLOR cards for customers and the utilization rate of the card was on the rise of 60% by the end of June this year.

Debt-to-equity ratio was 2.0 times, significantly decreased from the 3.5 times as of December 31, 2020, which was due to capital increase from being listed on the Stock Exchange of Thailand since May 2021.