The U.S. Federal Reserve’s Chair Jerome Powell on Friday indicated that the central is likely to begin tapering federal asset purchases before the end of the year. Earlier global asset classes remained volatile following speculation in the market on the tapering timeline. In recent months, as the vaccination rate in the U.S. reached 61% of the population (first shot), economic indicators showed a strong rebound as the economy breathed a sigh of relief. Acknowledging the threat from the Delta variant, Powell remains flexible on the tapering timeline.

The FED although to taper asset purchases however does not have the intention to hike rates in the near future. It was clear taper does not mean a rate hike. The interest rate hikes could follow at the earliest end of 2022, which implies a steeper yield curve and the market is likely to adjust to it. The FED’s balance sheet stands at $8.4 trillion, double that in March this year.

Inflation now is a concern with the PCE price index at 4.2 % YoY while core PCE stood at 3.6% YoY in July which is way above the FED’s 2% inflation target level. This has put upward pressure on the yield of short to longer term. However, the FED believes inflation is transitory. Pandemic lead consumption pressure with shortages in supplies along with various other factors contributed to the rising inflation. The output level fall was twice the full decline in the great depression. Recovery of commodity prices and rise in secondhand auto car prices had a substantial impact on inflation which recently is subsiding. Longer-term the FED maintains an inflation target of 2%.

Relative to the great depression the pandemic lead recession was the shortest yet the briefest recession in history. However, the market expects a V-shaped recovery post-pandemic which is showing some early signs. The FED remains optimistic on the unemployment level which is yet to meet the desired level. The current unemployment rate is at 5.4% which is down from last year’s high of 19.1%. The market is closely watching the payroll numbers to be released on coming Friday.

The market interpreted the speech as a tick to end the volatility surrounding the tapering. Major US benchmark indices closed at a record high in history while the VIX index dropped -12.40%. This morning the Asian indexes did not respond sharply on the upper bound, however, KOSPI is trading at an all-time high in history. The dollar index (DXY) is on a downward movement at 92.645. 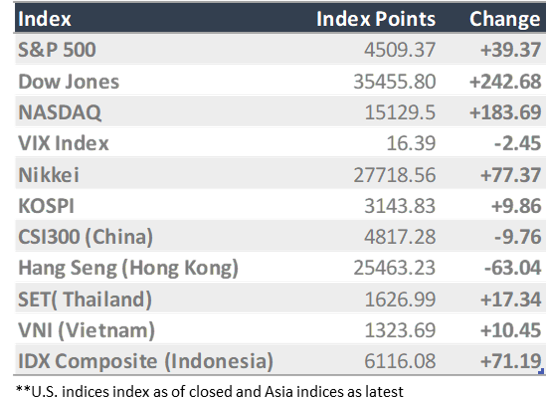