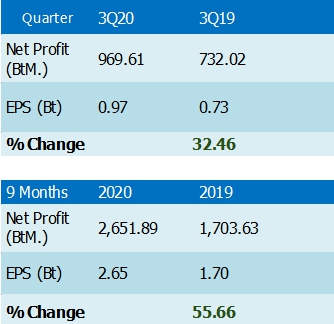 CBG reported a net profit of 969 million baht in 3Q20, increased 32.46% when compared to the same period last year. The increase was mainly due to the increase in sales of every product segment and improving overall gross profit margin particularly higher gross profit margins of the branded product by the company’s own manufacture, and the effective management overselling and admin expenses,which compensated higher corporate income tax expenses.

In the third quarter of 2020, total revenue from sales were THB 4,405 million, an increase of THB 543 million or 14.1% driven by higher sales of every product segments, particularly the increasing sales orders of the energy drinks for export markets and the greater sales from distribution of third party’s products.

The domestic sales of branded products by own manufacture were THB 1,569 million, a decrease of THB 22 million or 1.4% mainly due to the economic contraction and higher unemployment rates compared to the year prior, according to the Bank of Thailand.

Overseas sales of energy drinks were THB 2,048 million, an increase of THB 269 million or 15.1%, of which 81% was from CLMV market, 6% from China, and the rest 18% from other countries of which the majority were orders from Yemen and Afghanistan.

Sales of branded product by the third party’s manufacture were THB 135 million, an increase of THB 13 million or 10.9% mainly due to CBG’s new pricing strategy on Carabao RTD coffee starting in the July 2020 which drove sales of Carabao RTD increased by THB 15 million or 18.0%.