– SET Index closed at 1,369.42 points, increased 4.83 points or 0.35% with a trading value of 82.3 billion baht. The analyst stated that the Thai stock market went in the opposite direction as the majority stock markets in the region as well as the European markets and Dow Jones Futures.

SET Index priced in domestic-positive sentiment after the 3Q GDP came in better-than-expected, coupled with S&P Ratings maintained “stable” outlook on Thailand with a BBB+ rating. Moreover, the overall earnings of 3Q listed companies were 24% higher than 2Q, showing a recovery sign from early plummet.

– PTT Board of Directors approved to acquire a 50% stake on GRP from GPSC to support PTT Groups strategic target of 8GW of renewable energy by 2030. The transaction, with a value of approximately Bt693mn, is expected to be completed by 1Q21.

– CHAYO issued a debenture not exceeding 800 million baht with two-year maturity and an interest of 6%.

– KGI ranked GULF as “Super Growth Stock” in the next 10 years, seeing plenty of opportunities in Vietnam and recommended “BUY” at a target price of ฿39.00/share. 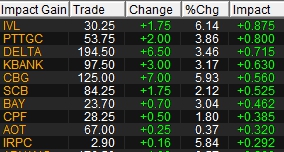