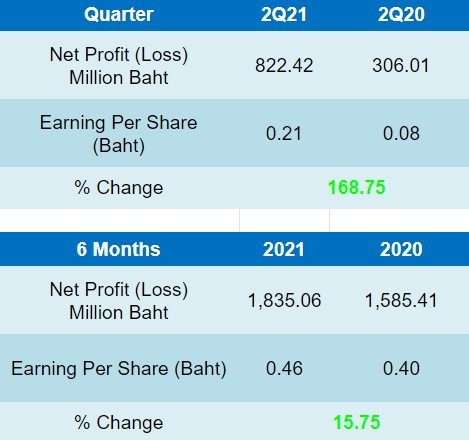 If removing the one-time expense relating to the employee severance pay due to corporate restructuring amounting to THB 437 million, booked in 2Q20, the recurring earnings before interest and tax increased by THB 79 million or 10.6% from the same period last year.

Meanwhile, the consolidated net profit for 1H21 reached THB 1,835 million, an increase of THB 250 million or 15.7% over the same period last year.

The total expenses for 2Q21 amounted to THB 35,978 million, a decrease of THB 1,940 million or -5.1% over the same period last year. This decrease was mainly due to (1) decreased cost of goods sold expenses due to lower sales, and (2) decreased SG&A expenses mainly due to strong cost control focus and lean organization initiatives, and (3) lower interest expense.

In addition, BJC has passed a resolution to offer an interim dividend payment at the rate of 0.15 baht per share to be paid on September 8, 2021, with an Ex-dividend date on August 24, 2021.