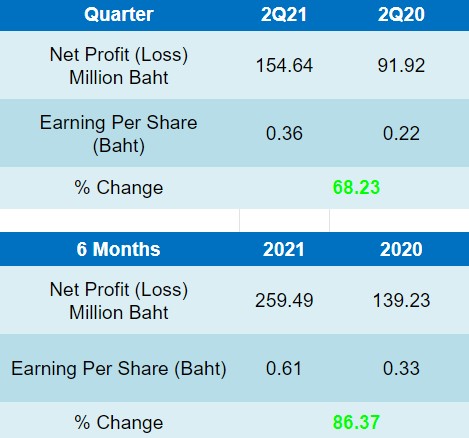 In 2Q21, XO’s total revenue from sales was Baht 456.40 million, which increased by Baht 117.06 million or 34.50% when compared with the same period in 2020. Such an increase stemmed from higher numbers of retail stores that managed to sell the company’s products. The total revenue from sales during 1H21 was recorded at Baht 807.94 million which resulted in an increase of Baht 196.14 million or 36.02%.

Gross profit margin has increased to 46.51% in 2Q21 as compared to the same period of last year including 1Q21. This is because the customers’ purchase orders had increased, and as a result, the overall utilization rate was higher, and consequently, the production cost per unit has decreased. Moreover, the company also managed to increase its proportion of sales of high profit margin products.