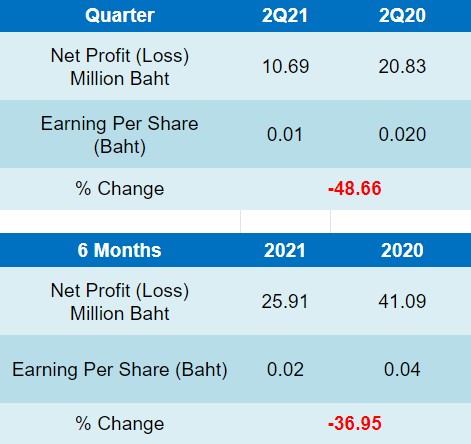 In 2Q21, NRF reported consolidated operating revenue of Baht 448 million, increased by Baht 121 million or 37.0% from 2Q20 mainly due to increase in Ethnic Food revenue from North America and European customers, consolidated revenues from City Food and BOOSTED NRF Corp.

Gross Profit Margin was 38.2% in 2Q21, improved from 30.9% in 2Q20 due to synergy received from BOOSTED NRF Corp. as E-commerce Business generated higher gross profit margin.

Net Profit was 10.69 million baht, down 49% from the same period of last year, mainly from lower amount of adjustment items from lower long-term loan interests prior to IPO and increase in loss-sharing from Plant And Bean Ltd. as British Retail Consortium (BRC) approval was delayed due to COVID-19 situation, as well as impact from container shortages, shifting Baht 100 million revenue to 3Q21 while SG&A costs for those delayed shipments were already recognized in 2Q21. As the new facility is expected to receive BRC approval in September 2021 and will ramp up production immediately afterwards, it is expected to see further improvement in 4Q21.