– SET closed at 1,731.59 points, fell 8.86 points or 0.51% with a trading value of THB70.71 billion. The SET Index closed lower on Friday in the opposite direction of regional market which mostly closed higher. Today, Thai Market closed negatively after the BOT has announced the measurement to prevent Thai Baht speculation. As a result, the investors poured to reduce the risk and wait to see a situation. The report of China’s economy showed a decrease in China’s June exports of 1.3% while imports dropped by 7.3% in the same period. However, a decline of China imports and exports in June was higher than Reuters’s economists poll expected at 4.5% and 2%, respectively. Moreover, in 1Q19, the customer data showed a drop of 9% of the total trade between China and the U.S.

– Stocks in Focus on 12 July 2019: STEC and CPN
– Analyst expected core earnings of STEC to be THB 429 million, increasing 40.5% YoY, 24.9% QoQ. The improvement YoY would be due to higher revenue after accelerated progress on the MRT Orange, Pink and Yellow lines. Moreover, an increase QoQ would come from the improved gross margin which no employee benefits provision and a higher dividend income from Gulf Energy Development. So, the analyst recommended “BUY” STEC share with the target price at THB 34.50/share.
– Analyst estimates a 2H19 profit growth of CPN to grow better than 1H19 from transferring of three projects of “The Escent” and selling a horizontal project of “Phyll” Phaholyothin 34 (30% sold). Moreover, the additional income from “Central Village” in the 3Q19 and the shopping center after renovation as well as an increasing of rental fee to strongly increase a 2H19 of CPN profit growth. Therefore, AIRA estimated the main business profit for the whole year of 2019 to be THB11,739 million, increasing 8% with the “BUY” recommendation at the target price of THB90/share based on DCF method to the current share price with a 17% upside.

– PTTEP revised the five-year plan to hike the expenditure to $21 billion, CAGR to grow 7%.

– “6 refinery stocks” rose in response to a hike of GRM, analyst recommended “BUY” TOP with the target price of ฿88/share. The rise of refinery oil sector’s share price was due to Singapore’s GRM rose to a level of USD7 per barrel. price of ฿88/share. 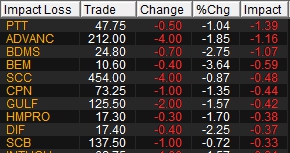