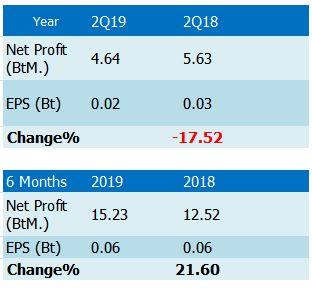 Net profit for the second quarter of 2019 is THB 4.64 million, from THB 5.63 million in the same period of 2018, decreased by THB 0.99 million or 17.58%, which was mainly due to an increase in employee benefit expenses according to the new Labor Protection Act ( Adjusting the compensation rate for employees who working for 20 years to receive compensation from 300 days to 400 days), together with a slightly lower in sales volume. However, the company has a higher profit margin due to the increase in spread between the selling price and the raw material price.

The company has 2Q19 sales revenue of  THB 124.97 million, from THB 133.41 million in 2Q18, decreased by THB 8.44 million or 6.33%. This is due to a decrease in sales volume by 45 tons and the decrease average selling price per kilogram by 2.75 baht per kilogram. Which is a result of raw material price declining circumstance and higher competition levels in the market.