– SET closed at 1,620.23 points, declined 30.41 points or 1.84% with a trading value of THB 64.18 billion. The SET Index continued to close in the negative territory from the last week. A decline of Thai Market’s today was the same as the regional market in the negative direction. The one factor which might have led to a fall of the Asia market was a tension protester in Hong Kong after the shutdown of Hong Kong airport, yesterday, the airport has reopened today morning, 13 Aug 2019.

– Stocks in Focus on 13 August 2019: BGRIM and BCH
– BGRIM: The analyst expected BGRIM to grow continuously in a 6-7 year from operating the solar power plants in Thailand, Laos, and Vietnam which will raise BGRIM’s total generating portfolio to 3,245 MW in 2022 from 2,076 MW in 2018. Therefore, the analyst recommended “buy for investment” BGRIM share with the target price of ฿39.00/share based on DCF method.

– BCH: The analyst recommended “BUY” BCH share with the target price of ฿19.10/ share based on DCF method. BCG recorded its 2Q2019 net profit of THB 244 million, decreasing 2.4% YoY, which was lower than the market had expected at 6%. BCH profit has decreased when compared to the same previous last year due to a provision for employee benefit derived from new labor law and the opening of Kasemrad Ramkhamhaeng at the end of last year. However, the analyst expected 2019 of BCH net profit to grow 6% YoY to THB 1.16 billion with 3Q2019 earnings to return to a strong growth path given the benefit of seasonality and SSO revenue. In addition, the analyst believed BCH’s share will come back to outperform and see a rebounding in view of better 3Q2019 outlook from a 3Q2019 profit growth.

– Hong Kong airport reopened, Thai Airways resumed normal flight. After the shutdown of Hong Kong airport in the afternoon of August 12, 2019, the airport has reopened today morning, August 13. Still, hundreds of flights are listed as canceled while the airport authority is trying to reschedule the timetable.

– PSTC’s 2Q19 profit dropped 23% due to the decrease in revenues and high expenses.

– CENTEL reported a decrease of 37% in 2Q2019 profit from the provision of employee benefits.

– WICE’s 2Q19 profit declined 68% due to a high investment cost and administrative expenses.

– ESSO reported a net loss of ฿927m in 2Q from a lowe sales volumes and refining margin. 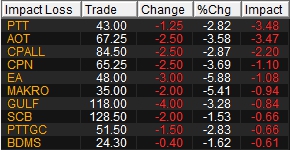