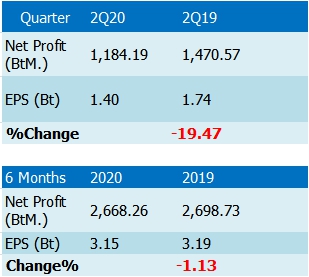 In 2Q20, net interest income amounted to Baht 3,615 million, an increase of Baht 698 million or 23.9% YoY from Baht 2,916 million in 2Q19. Interest income was Baht 4,937 million, increased 13.7% from 2Q19 mainly from the increase in interest income on loans and hire purchase and financial lease income from loan expansions and partly from the change due to TFRS 9 interest income calculation based on effective interest method.

During 2Q20, the Bank has lowered the lending rates for MLR, MOR, MRR further in addition to the reductions made during 1Q20.

For 2Q20, non-interest income totaled Baht 1,238 million decreased from Baht 1,818 million or 31.9% YoY. The decline is mainly due to gain on investments income recorded during 2Q19 at an amount of Baht 499 million while the Bank recorded loss on investments during 2Q20.

Additionally, net fees and services income totaled Baht 885 million also declining by 12.9% YoY from Baht 1,015 million during 2Q19 with decreased attributed mainly to the decline in loan-related fee which under TFRS 9 is amortized and recorded in net interest income.

Expected credit losses (ECL) in 2Q20 totaled Baht 744 million, an increase of 21.9% compared to Baht 610 million for 2Q19. The increase is mainly due to the Bank cautionary measure after assessing the various conditions and economic uncertainties arising from the COVID-19 situation which could result in asset quality deterioration in the coming periods.

The Non-Performing Loans (NPLs) or Stage 3 loans excluding POCI as of the end of 2Q20 totaled Baht 8,441 million or 3.4% of total loans, decreasing from 4.0% at the end of 2019 from the decline in NPLs from both retail loans segment and commercial lending segment from continuous asset quality management.