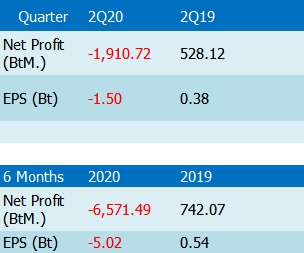 Due to the company recording impairment loss of major trade account receivable, that went into business rehabilitation under the supervision of the Central Bankruptcy Court, THB 894 million, and the asset impairments incurred from the retail business restructuring of Bangchak Retail Co., Ltd. THB 135 million. Resulting in this quarter recording the net loss attributable to owners of the parent was THB 1,911 million (+59% QoQ, -462% YoY) or loss per share of THB 1.50.

Gross profit was recorded at THB 558 million, an increase of 146% QoQ, mainly contributed by petroleum related businesses. The Refinery business group recorded higher Total Gross Refinery Margin (Total GRM) by 2.94 $/BBL from a loss of 6.16 $/BBL in Q1/2020 to a loss of 3.22 $/BBL, mainly due to the improving Operating GRM.

When compared to 2Q19, Gross Profit declined 78% YoY, primarily decreasing from the refinery business group which recorded a lower Total GRM due to the lower finished oil product demand following the COVID-19 outbreak.

Selling and administrative expenses was recorded at THB 1,585 million, a decrease of 10% QoQ and 16% YoY due to strict measures to control expenses during the COVID-19 pandemic situation.