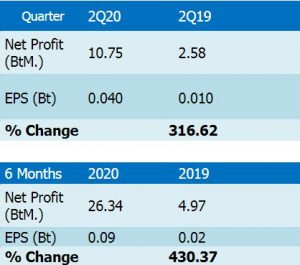 For the quarterly periods ending on 30 June 2019 and 30 June 2020, SICT had selling expenses at 6.70 million baht and 5.65 million baht or 8.98% and 7.53% of total sales revenue, respectively. Selling expenses declined due to the Coronavirus outbreak causing the sales department to entirely adjust international travel plans to online communication with customers instead.