– SET Index closed at 1,323.31 points, decreased 3.50 points or 0.26% with a trading value of 54.4 billion baht. The analyst stated that the Thai stock market started to decline in the afternoon session due to profit-taking after being able to stand in positive territory in the morning due to the Fed’s statement of the monetary policy shifting that would keep interest rates at the minimum.

The analyst expected sideways trends to continue next week with a support level at 1,300 points and a resistance level at 1,350 points.

– Foreign Investors pulled back with a 3.8 billion baht selloff, plunging SET by 3.50 points.

– New Zealand Stock Exchange halted trading sessions for the fourth day due to a cyber attack.

– GULF topped up stakeholding in INTUCH to 8%, booking 300 million baht from dividend in 3Q20.

– MTC to show a counter-trend growth, the analyst recommended “BUY” at a target price of ฿66.00/share.

– Kasikorn Research cut 2020 Thai GDP to 10% contraction as pandemic and political issues weighed on the economy. 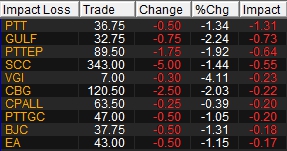