– SET Index closed at 1,216.48 points, increased 5.81 points or 0.48% with a trading value of 54.4 billion baht. The analyst stated that the Thai stock market dropped from more than 10 points gain to close 5.81 points higher after a decline in the afternoon session as the protesters announced their movement for a gathering later in the day.

The analyst stated that SET Index performed better than the analyst had anticipated, but still could not break the 1,220 resistance level, while the banking sector which was trading lower for weeks saw a rebound even though the announced earnings were lower than estimated.

In addition, the analyst advised investors to keep monitoring listed companies’ 3Q earnings and keep a close eye on the progress of the protest in Thailand, giving a support level for tomorrow’s session at 1,200 points and a resistance level at 1,225-1,230 points.

– Local Institutions returned with a 2.4 billion baht of net buy and buoyed the Thai stock market by nearly 6 points.

– PTG acquired an additional 38% stake in “SIAM AUTOBACS” to accumulate its voting rights to 80%.

– MCS rebounded 3.25% after affirming a satisfying 2020F results with new projects to come.

– Finansia Syrus recommended “BUY” on GFPT with a target price at ฿15.60/share, seeing a recovery in 3Q20.

– Maybank expected solid growth for PTTEP with synergies between G1-G2, recommended “BUY” at a target price of ฿110.00/share.

– SCGP recorded a jumping profit in 2Q by 94% after booking ฿80Mn of FX gain. The company will kickoff its first trading day on October 22. 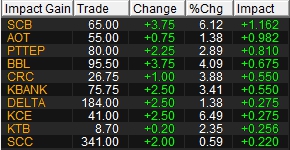