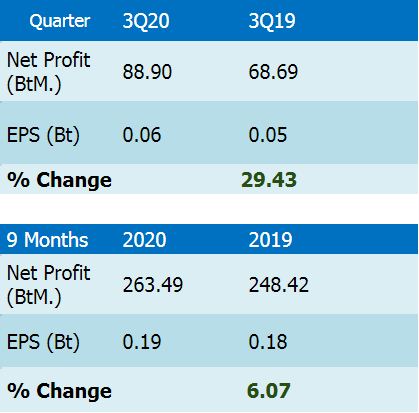 TKN has a net profit in 3Q20 of 88.9 million Baht which increased by 29.4% compared to the same quarter of the previous year, mainly resulted from a decrease in distribution costs by 5.3% YoY and an increase in gross profits by 0.2% YoY, as the production costs started to decrease since June due to the utilization of the seaweed of the 2019 season (the price of which is lower than that of the previous year), although the utilization rate of the production capacity is declining, and as such, the unit fixed cost is consequently higher.

Meanwhile TKN’s revenue from sales in 3Q20 was 978.7 million Baht decreased by 22.8% compared to the same quarter of the previous year, primarily due to the Covid-19 pandemic, both in domestic market, particularly tourists, and international markets during the severe outbreak in the respective countries.