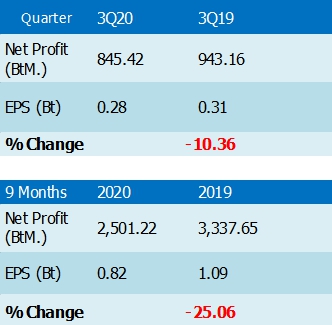 BPP reported a net profit of 845 million baht, decreased 10.6% compared to the same period of last year. The main contributions for BPP’s profit came from its 2 major IPP plants, BLCP that maintain high reliability with equivalent availability factor or EAF of 100% while HPC resumed normal operation after completion of major maintenance of unit 3 and reported the EAF of 72%, which impacted the 3Q20 performance due to the shut down during July and August

The company also realized a foreign exchange translation gain of THB 138 million due to depreciation of THB against USD.