SISB Public Company Limited (SISB) has reported its 3Q20 consolidated financial statement through the Stock Exchange of Thailand as follows; 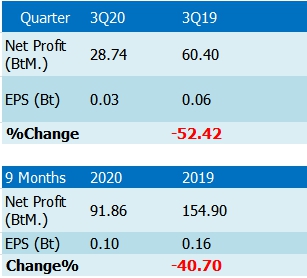 SISB reported a net profit of 28.74 million baht in 3Q20, decreased 52.42% compared to the same period of last year. However, the profit in 3Q showed an improvement from the previous quarter which reported at 4.26 million baht, increased by 573%.

Tuition fee income for 3Q19 and 2020 was 263.59 million baht and 240.46 million baht respectively, decreasing by 8.77% resulting from mainly from a one-time support discount that the company set to help parents for the third semester, academic year 2019-20. Snack & lunch income, after-school activities income and field trips income also decreased due to school closed and students using Home-Based Learning. The average tuition fee income per student decreased to 0.41 million baht per student in September 2020, dropping by 7.08% from the same period of the previous year.

The company commenced the construction of a new Secondary Building at its Singapore International School Thonburi campus with a groundbreaking ceremony on 17 July 2020. SISB stated that it expected the building would be completed by August 2021. The project value is around 350 million baht.