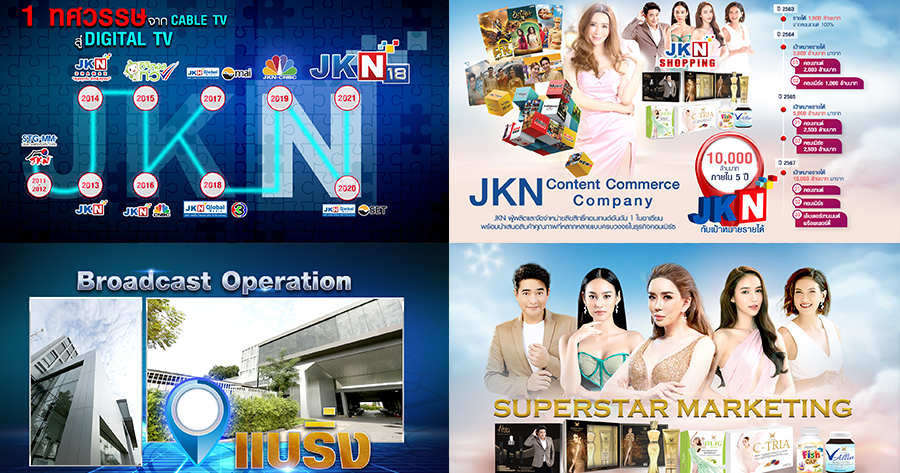 JKN Global Media Public Company Limited (JKN) is moving forward to strengthen its commerce-related business after acquiring NEW18, while expecting revenue to double to 5,000 million baht within the next three years.

The acquisition of DN Broadcast Company Limited (DN) to operate a digital TV business of NEW18 Channel to follow its strategic plan and step up to be a Content Commerce Company.

The company is expected to expand its customer base from satellite television to digital TV and strengthen its commerce-related business by bringing up the company’s profession in creating content to boost JKN’s sales revenue.

JKN has 24/7 news reporting by well-known reporters, along with popular TV series and a D2C product advertisement that would increase the rating of the soon-to-be JKN18 Channel through online and offline in response to the New Normal.

The operation of JKN18 will support JKN’s commerce-related business that is currently in a process of restructuring for higher sales growth and wider GPM. This will increase JKN’s overall average GPM to reach 50%, paving the way to solidify its long-term growth that expects to reach 5,000 million baht of revenue within three years.

Meanwhile, the company will research and develop new innovations to meet consumers’ demand such as hemp-infused products that are expected to be more than 10 SKUs by cooperation with DOD.

Nevertheless, there will be one big challenge waiting for JKN on how to turn DN from booking a net loss to make some profit after the acquisition.

The recording of net loss each year dragged on and on. As of 2020, DN recorded a net loss of 238 million baht, making this a difficult task for JKN to bring back this company to a positive side.

The plan to raise profit for DN might be lying in the hands of JKN’s executives, especially Mr. Jakkaphong Jakrajutatip, the CEO of JKN.