It has been more than a year since the first coronavirus outbreak in Thailand, and the uncertainty of the current situation pulls the positive momentum from vaccine rollout down, causing the Thailand SET Index to plunge from nearly 1,640 points to 1,587.79 points.

Even though the pandemic is still harassing the capital market, Thailand has dominated the Initial Public Offering (IPO) market in Southeast Asia in the first half of 2021, following the trend in 2020 when the country also set a record of highest capital raised through IPO in SEA.

The number of IPOs has exceeded its normal level of around 30 listings a year for the whole Southeast Asia region, while the data showed that most firms usually go officially public in the second half of the year, meaning that there could be a huge IPO wave to come later this year.

While the spinoff of Thailand’s largest and oldest cement and building material company, The Siam Cement Group PCL, for its packaging business under the symbol of SCGP which raised 45 billion baht of funds had been a big help in pushing Thailand into the No.1 spot of listing companies last year, the spinoff of oil giant, PTT, and leading Thai bank, Bank of Ayudhya, had left other IPOs in SEA in the dust.

PTT Oil and Retail Business Public Company Limited (OR) led all IPOs in the fund raise this year with a total value of 46.98 billion baht. The company, a subsidiary of PTT PCL, operates an integrated oil and non-oil retailing platform both in Thailand and abroad, while owning one of the most well-known coffee shops “Cafe Amazon”. Currently, OR has a total of 3,200 branches of Cafe Amazon in Thailand and overseas.

The IPO market is growing at a rapid pace as corporates are expanding and diversifying their businesses while seeking for a better source of funds other than support from financial institutions that come with higher interest rates. 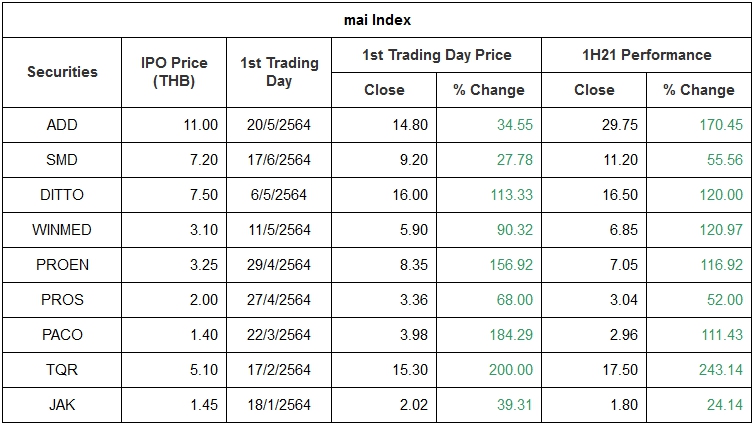 Seeing how the IPOs trends and performance go, there will be a total of 24 more IPOs expected to list in the Thai stock market this year, which could lead Thailand to the title of highest IPOs value in SEA for two consecutive years.