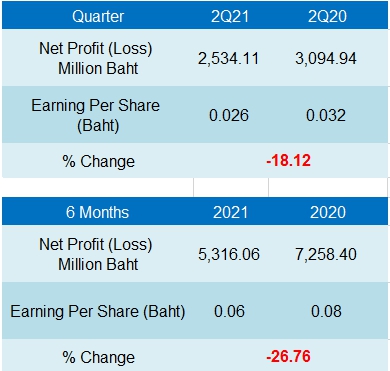 Meanwhile, TTB posted 3,118 million baht of non-interest income in 2Q21, which dropped by 11.5% from the same period last year. The decline was mainly from lowernet fees and service income.

In 2Q21, cost to income ratio was reported at 46%, improving from 47% in 2Q20 with the strong cost discipline, cost-savings helped maintain level of C/I ratio even with the pressure on the income side.

TTB stated that the bank was prudent and set a provision of 5,491 million baht, increased 10.4% from the same period last year, while NPL remained within the target at 2.89%.