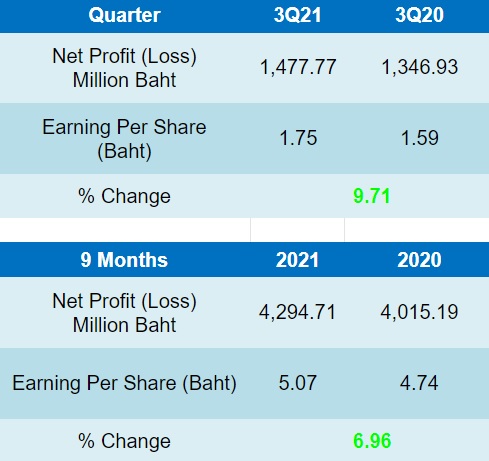 For 3Q21, the consolidated net profit of KKP totaled Baht 1,478 million, an increase of 9.7% from 3Q20 of which Baht 533 million was the net profit from Capital Market business. The increase was mainly driven by the considerable growth in non-interest income of 54.2% with net fee and services income registering an increase of 42.2% YoY.  Meanwhile, net interest income also grew by  8.3%. In terms of provisions, the Bank continued to prudently set up additional expected credit loss amounts with the provisions level for 3Q21 remaining at a similar level as that of 3Q20.

For the nine months of 2021, the consolidated net profit totaled Baht 4,295 million, an increase of 7.0% compared to the same period last year, of which Baht 1,469 million was the net profit from Capital Market business. The increase was driven by higher non-interest income from the growth in net fees and services income while net interest income also increased. Meanwhile, provisions for the first nine months of 2021 increased when compared to the same period last year consistent with the Bank’s prudent measure in setting up elevated expected credit loss amid on-going uncertainties.

Meanwhile, the consolidated comprehensive income for the first nine months of 2021totaled Baht 4,967million, an increase of 27.8% with Capital Market business comprehensive  income at Baht 2,329 million. The increase was largely contributed by the realized gains on sale of equity instruments designated at FVOCI which for the nine months of 2021 totaled Baht 528 million while revaluations on investment also increased.