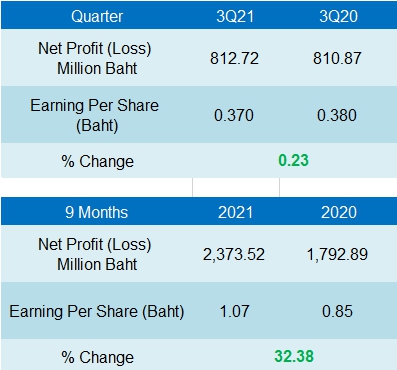 Meanwhile, service and administrative expenses were THB 4,600.8 million, increased by 11.2% as compared with the same period of the previous year of THB 4,138.1 million, which aligned with branch expansions and the expansion of lending businesses, insurance business, and Tidlor cards, as well as increasing in information technology and digital transformation related expenses.

Total liabilities were THB 40,028.6 million, increased by 3.7% from THB 41,587.0 million as of December 31, 2020, mainly due to a reduction in short-term borrowings and long-term borrowings from financial institutions.

Debt-to-equity ratio as of September 30, 2021 was 1.9 times, significantly decreased from the 3.5 times as of December 31, 2020, which was due to capital increase from being listed in the Stock Exchange of Thailand since May 2021, and effectively manage borrowings.