After You Public Company Limited (AU) has reported its consolidated financial statement through the Stock Exchange of Thailand as follows: 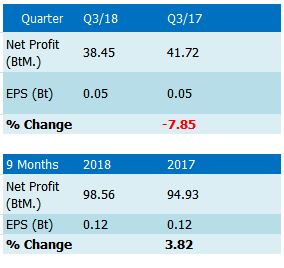 AU booked ฿38.45 million of profit from its 3Q18 operations. The profit decreased 7.85% when compared to the same period of last year, but increased 3.82% in 9 months YoY.