– SET closed at 1,648.46 points, increased by 10.77 points or 0.66% with a trading value of THB 54.21 billion. Most of Asian markets rose after the Wall Street posted a high jump overnight as Jerome Powell, U.S. Federal Reserve Chairman stated that the central bank will “act as appropriate to sustain the expansion.”

Moreover, the Thai market was buoyed by the hope of the newly elected prime minister which currently being debated in the parliament, resulting in the continuation of THB 4.8 billion of net bought from foreign investors.
– PLANET signed a purchase contract with “Bliss Planet” for high-speed internet Zone C project.
– U reported the completion of acquiring shares in 12 companies in Germany and Switzerland.
– Abhisit stood his ground to oppose “Prayut” Running for PM, resigning from Democrat’s MP.
– TTCL fell 2% after the disposal of TTGP to acquire ฿1.33 billion. TTCL closed the day at ฿8.20/share, declined by 0.10 or 1.20%, highest at THB 8.45, and lowest at THB 8.00 with a trading value of THB 49 million. A decrease of TTCL’s share price might be the effect from disposition of investment in TTGP.
– “Tawich” led new board of directors to solve IFEC’s crisis, emphasizing on working carefully for the benefit of shareholders.
– SET reclassified 7UP to “Energy & Utilities” sector, starting on 20 June 2019.
– SET reclassified TRITN to “Construction Services” sector, starting on 20 June 2019.
– IMF cut China’s economic growth to 6.2%, tormenting by the escalation of trade war. 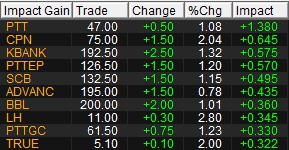