IRPC Public Company Limited (IRPC) has reported its 2Q19 consolidated financial statement through the Stock Exchange of Thailand as follows: 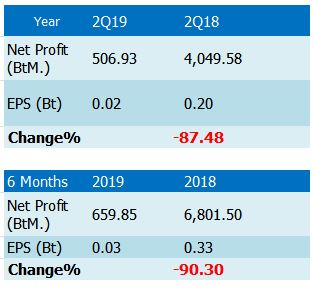 The net profit of IRPC in the second quarter of 2019 was THB 506.93 million, decreased 87.48% YoY while the profit for six months in 2019 plunged by 90.30% mainly due to the decrease of average selling prices following the crude oil price. The crude intake was 203,000 barrels per day down by 8,000 barrels per day because the RDCC unit ceased the operation for 28 days in the first quarter.

IRPC had mMarket GIM of THB 10,387 million or USD 8.90 per barrel, decreased by THB 6,675 million or 39% from 1H/2018 as a result of the significant decrease of both petroleum and petrochemical products spread. The spread decrease was affected by many factors including the prolonged U.S-China trade war, the new capacity in the region and the increasing production rate in the U.S.

As a result of baht appreciation, the Company had foreign exchange gain of THB 340 million, increasing by THB 316 million.