– SET Index closed at 1,435.70 points, increased 24.69 points or 1.75% with a trading value of 120 billion baht. The index rose 48% from its 970 point in March. The analyst stated that the Thai stock market soared in the afternoon session, breaking the resistance level at 1,430 points, in response to the fund inflow as the energy sector and petrochemical were on top of the leader’s board, hoping the OPEC and its allies’ meeting (reportedly on Saturday, June 6) to approve further output cut.

The analyst advised investors to be cautious in next week’s session due to the market has an outstanding gain this week, giving a support level at 1,400 points and a resistance level at 1,460 points.

– May’s Consumer Sentiment improved for the first time in 15 months as the government eased lockdown.

– TRUBB approved to bring a subsidiary “World Flex” to list in SET.

– SSO acquired additional shares in BBL to accumulate a total over 5%.

– Subscription for CPF’s debenture broke the amount of existing shares over 25 billion baht.

– MTC issued two series of debentures worth 4 billion baht to be sold on 9-11 June.

– ICN acquired a design and installation of IP-CAN project from PEA worth ฿172mn.

– TRC signed a contract of two construction projects for a total value of ฿720mn. 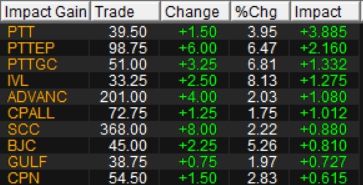