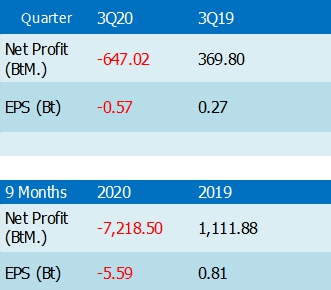 As for 3Q20 performance, the company recorded revenue from sale of goods and rendering of services of THB 33,652 million (+27% QoQ, -28% YoY), and recorded EBITDA of THB 2,769 million (+145%QoQ, +29%YoY), which improved from the previousquarter. As the COVID-19 outbreak situation has begun winding down, the government announces the easing of further lockdown measures. This led to the oil consumption to pick up gradually and the average Dubai price increased from the previous quarter.

In this quarter, the company recorded an inventory gain of THB 272 million (including reversal on losses on inventory devaluation (NRV) THB 26 million).