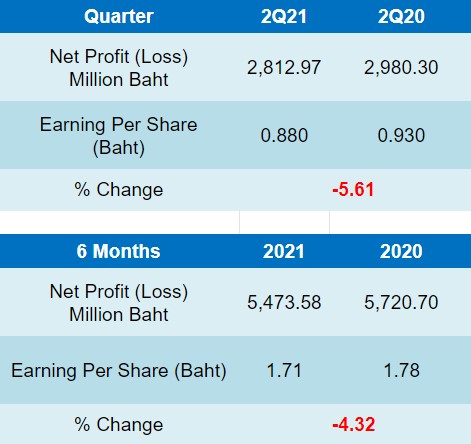 INTUCH’s consolidated financial statements for 2Q21 and 1H21 showed a net profit of 2,813 million baht and 5,474 million baht, respectively, a drop of 6% YoY and 4% from 1H20, mainly due to a lower contribution from the satellite & international businesses which had recorded a share of compensation (after a prepaid expense was written off) as other income in 2Q20. Even if this compensation is excluded, the contribution from THAICOM and ADVANC would have dropped, due to lower revenue and higher SG&A from legal consultation fees.

QoQ, net profit and normalized net profit rose 6% and 7%, respectively, mainly as a result of a higher contribution from the local wireless telecommunication business due to a decrease in SG&A from cost-saving measures.

Sales and service revenue increased YoY from higher mobile revenue but dropped QoQ due to more intense pricing competition during the latest outbreak of COVID-19, partially offset by an increase in fixed-broadband revenue as the subscriber base expanded, even though ARPU fell because aggressive price plans continued.

However, sales and service revenue in 1H21 was lower than 1H20, reflecting the prolonged economic impact from the current COVID-19 situation. Low pricing and weak consumer spending have caused mobile revenue to drop; by contrast, fixed-broadband revenue rose rapidly, driven by the increasing demand for home connectivity during the shutdown.

Sales and service costs dropped QoQ, mainly due to fewer mobile sales. Network OPEX & TOT partnership costs dropped QoQ and YoY, mainly because TOT partnership costs (based on usage) were lower, even though network OPEX was higher than 1H20. Despite the slowdown in revenue, AIS continued to implement its 5G investment plan. However, depreciation & amortization rose QoQ, YoY and from 1H20 due to the acquisition of new frequency spectrums.

In addition, INTUCH has passed a resolution to offer an interim dividend payment at the rate of 1.23 baht per share to be paid on September 2, 2021, with an Ex-dividend date on August 17, 2021.