Karnchang Public Company Limited (CK) has reported its 2Q19 consolidated financial statement through the Stock Exchange of Thailand as follows: 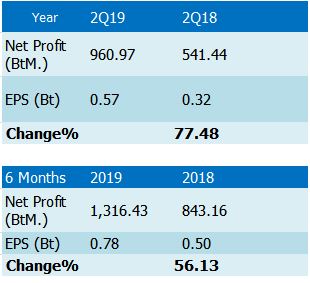 CK reported a net profit in 2Q19 at THB 960.97 million, increased 77.48% YoY. For the first half of 2019, CK had profit amounting to THB 1,316.43 million, up from the same period of the previous year by THB 473.27 million or 56.13% mainly due to increased share of profit from associated companies as Bangkok Expressway and Metro Public Company Limited (BEM) realized gain from revaluation of its investment in TTW Public Company Limited which was reclassified from investment in an associated company to investment in available-for-sale securities. As for the construction business, gross profit margin improved from 7.88% to 8.35%.