– SET closed at 1,663.93 points, increased 1 point or 0.06% with a trading value of 73.3 billion baht. Maybank Kim Eng stated that the market moved sideways in today’s trading session, in line with regional markets due to a lack of positive factors to support.

Today’s session was buoyed by the energy sector from the sentiment of higher oil prices after the Saudi Arabia’s output cut, seeing that it would take a while before the country can fully recover to its normal level.

Maybank expected tomorrow session to move sideways, giving a support level at 1,650 and a resistant level at 1,680.

– Individuals scooped 1.7 billion baht worth of Thai shares to buoy the market by 1 point.

– Energy Minister said that Thailand did not receive any impact from Saudi’s oil cut while having plans to satisfy oil demand.

– CPF fell 4.55% while TFG slipped 2.97% from the worry of African swine fever that occurred in northern Thailand.

– SAWAD asserted that the flood in northeastern region of Thailand did not affect the business while affirming that the revenue would grow by 30% this year.

– ILM said the fourth quarter would be the highest growth of the company after an opening of a new branch in Ho Chi Minh City.

Top 10 Most Impact Shares on September 17 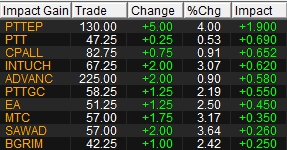