The Stock Exchange of Thailand (SET) has stated that securities listed on SET recorded total sales of THB 2.68 trillion (approx. USD 83.8 billion) for the first three months of 2020, down 4.3 percent from the same period of last year. Their cumulative net profit in Q1 fell by 60.5 percent year-on-year to THB 98.52 billion, with energy and petrochemical businesses suffering from the oil price war. If not including these two businesses, listed firms’ combined net profit dropped merely 25.2 percent.

“During the first quarter of 2020, Thai listed securities were impacted by both internal and external factors. The global economic slowdown since late 2019 has caused oil over supply and triggered the price war among major oil producers. The securities related to Energy & Utilities, and Petrochemicals & Chemicals sectors were considerably affected as a result. The economic slowdown made it difficult for the management of sales and marketing costs, dragging down core operating profit and net profit when compared to the same period of last year,” added Manpong.

Due to the performance issue, listed companies sought higher liquidity reserves by continuously increasing debt, making the debt to equity ratio (excluding Financials industry group) rise up to 1.53 times at the end of the first quarter from 1.27 times in the previous year.

However, some sectors performed well and reported growth in both sales and profit margin which are Food & Beverage sector, such as fresh food, livestock and beverage, as well as the Finance & Securities sector’s growth via personal loan, meanwhile, Packaging sector’s earnings propelled by lower raw material costs.

Q1/2020 performance of industry groups, based on sales 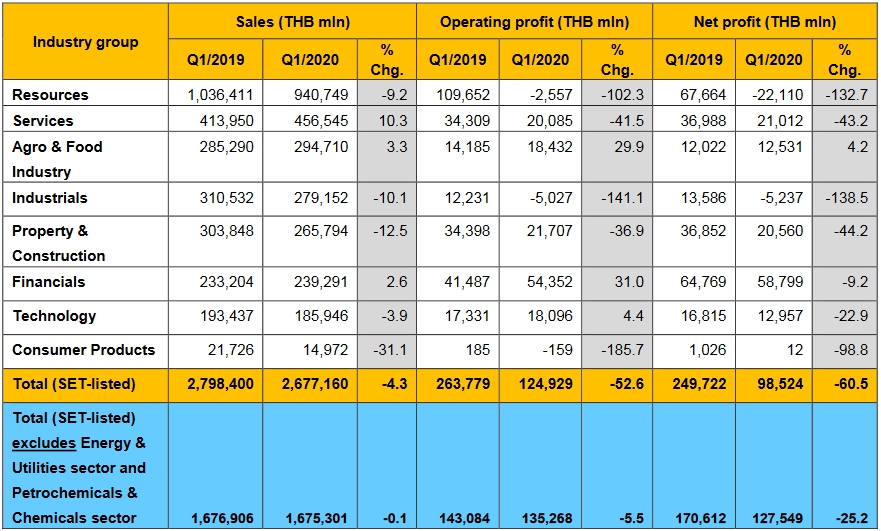