/ Kaohoon International / THCOM Continues to Record a Profit in 2020, Announcing Nearly ฿500M of Profit in 2Q!

Thaicom Public Company Limited (THCOM) has reported its 2Q20 consolidated financial statement through the Stock Exchange of Thailand as follows; 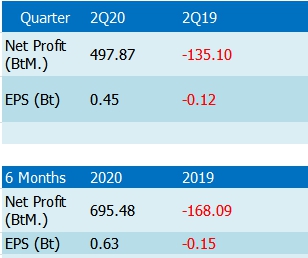 THCOM reported a net profit of 497 million baht, bounced back from a contraction of 135 million baht in 2Q19. The increase was mainly due to the recognition of the compensation income, together with the decrease of depreciation from Thaicom 5 satellite de-orbit and the impairment of other satellites in 2019.