– SET Index closed at 1,315.88 points, increased 10.31 points or 0.79% with a trading value of 43.6 billion baht. The analyst stated that the buyback came in the afternoon session in response to the announcement of CCSA that approved a ฿3,000 financial aid to 15 million individuals and top-up benefits for domestic travellers.

Meanwhile, Dow Jones Futures also edged higher, together with the oil prices that saw a decrease in crude inventory and an uptick in demand.

The analyst stated that SET Index could face a profit taking in tomorrow’s session, giving a support level at 1,305 points and a resistance level at 1,320 points.

– Oil surged to $46 as U.S. crude inventories fell and manufacturing began to pick up. 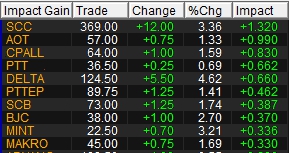