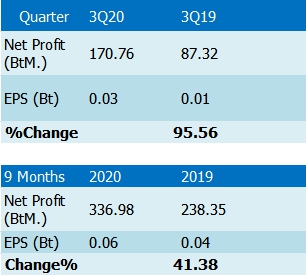 COTTO reported a net profit of 170 million baht in 3Q20, increased 95.56% compared to the same period of last year. The increase was due to an efficiency in management and operation, while the declining in energy cost from last year, and EBITDA amounted 386 million baht, increased 52% YoY, also contributed to COTTO’s 3Q profit.

However, revenue from sales for the period was 2,640 million baht, decreased 3% YoY, due to a decrease in sales volume from the pandemic of COVID-19 which affected the world economy and slightly decreased in average selling price.