PTT Exploration and Production Public Company Limited (PTTEP) has reported its 3Q20 consolidated financial statement through the Stock Exchange of Thailand as follows; 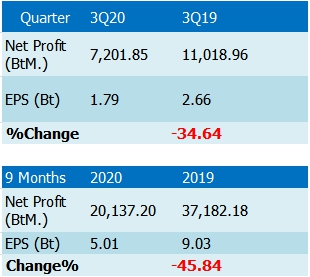 Dubai crude oil prices in 3Q20 averaged at 42.9 USD per barrel, increased from 2Q20 average price at 30.7 USD per barrel. This is driven by the OPEC+ that extended the production cut of 9.7 million barrels per day (BPD) until July and a production cut by 7.7 million BPD in August until the end of 2020, and demanding laggard members (i.e. Iraq and Nigeria) to continue compensating their cuts by 2.31 million BPD in August and September.

Global crude demand has recovered from its lowest level in April 2020. This was mainly from the improvement of global road traffic that has increased to 95% of pre-COVID level. However, crude oil prices in this quarter have moved in the level of 40 USD per barrel, reflecting the bearish factors from the lowering of crude prices by Saudi Arabia and the United Arab Emirates, and the resumption of crude oil production announcement by Libya in late-September that will increase the amount of supply in the market and needed to be monitored closely.